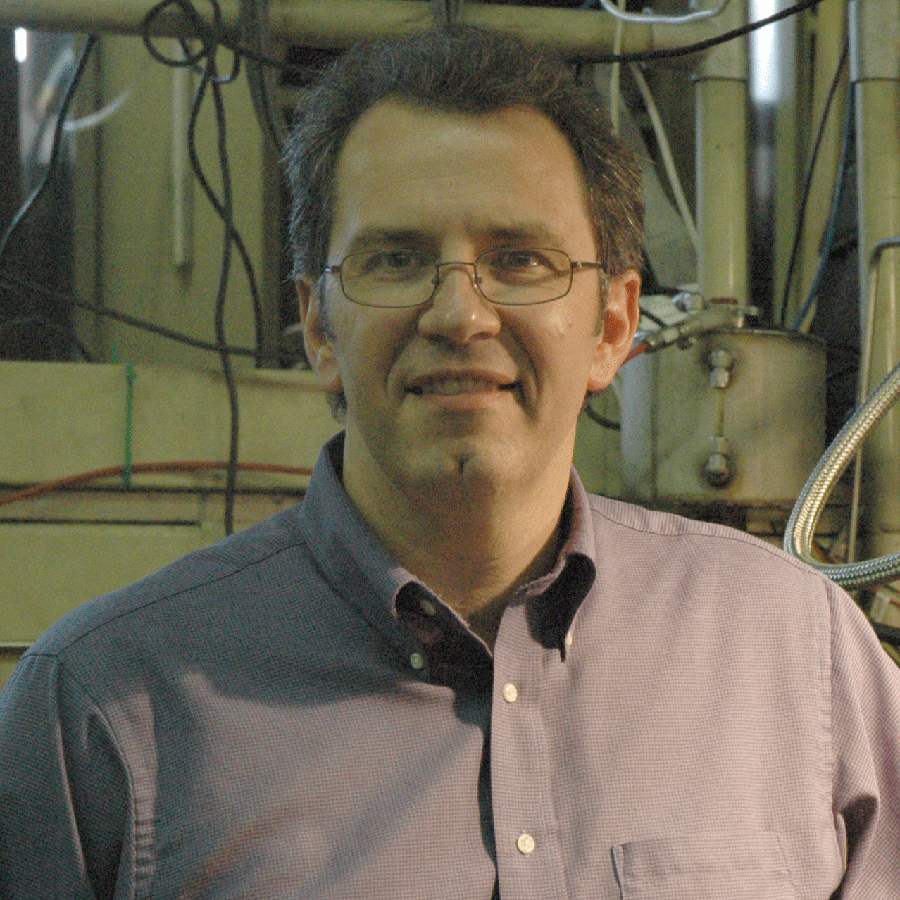 Dr. André Boehman, professor of fuel science, was elected as a 2011 International Fellow by the Society of Automotive Engineers (SAE).

SAE Fellow membership is given in recognition of “outstanding engineering and scientific accomplishments by an individual that have resulted in meaningful advances in automotive, aerospace, and commercial-vehicle technology.” It is the highest grade of membership granted by SAE International.

Boehman was chosen for the honor based on his “outstanding accomplishments for promising research in alternative and reformulated fuels and engine combustion and emissions.” He, along with the other members of the 2011 class of SAE Fellows, were celebrated at the SAE 2012 World Congress and Exhibition in Detroit, Michigan, in April.

SAE International is a global association of more than 128,000 engineers and related technical experts in the aerospace, automotive, and commercial-vehicle industries. 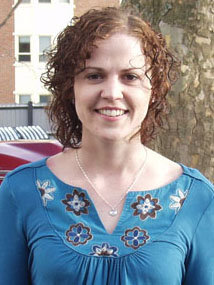 Enette Louw, graduate student in the John and Willie Leone Family Department of Energy and Mineral Engineering, was recognized at the 28th Annual International Pittsburgh Coal Conference on September 12 – 15, 2011.

The International Pittsburgh Coal Conference (PCC) is hosted by the University of Pittsburgh, Swanson School of Engineering. It is an outgrowth of a series of conferences spanning more than three decades, and dealing with coal utilization both in the United States and internationally. 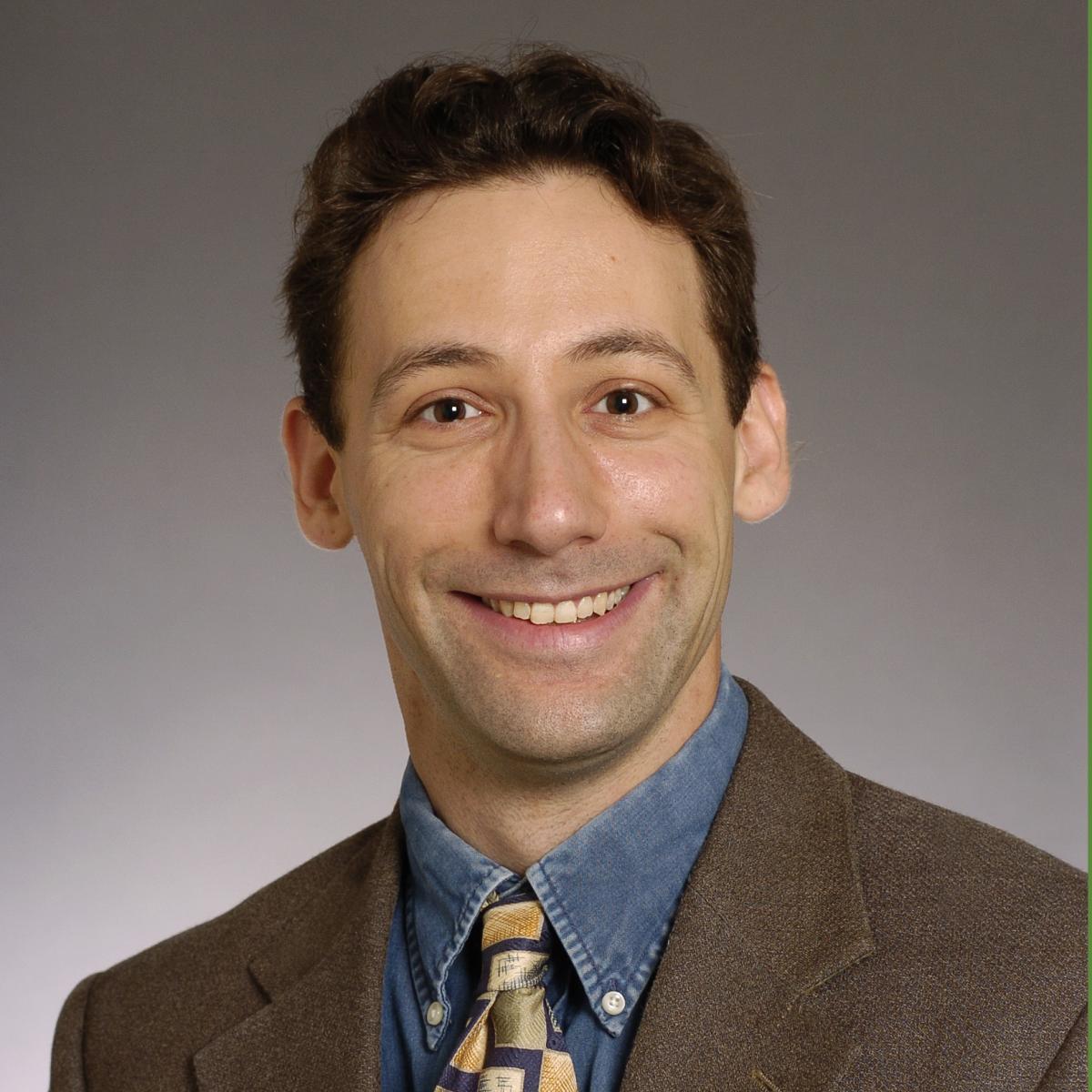 On July 1, 2011, Dr. Seth Blumsack, assistant professor of energy policy and economics in the John and Willie Leone Family Department of Energy and Mineral Engineering, was named a Ryan Faculty Fellow. The purpose of the fellowship is to provide supplementary funds to outstanding faculty members in the College of Earth and Mineral Sciences to assist them in continuing and furthering their contributions in teaching, research, and public service. 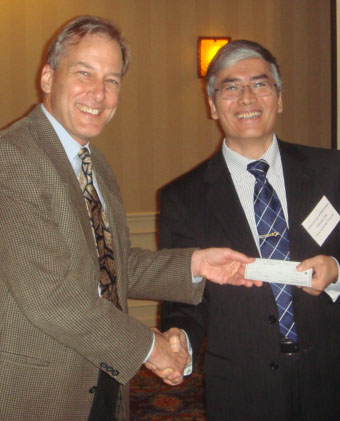 Chunshan Song recognized by the Catalysis Club of Philadelphia

The Catalysis Club of Philadelphia selected Dr. Chunshan Song, director of the EMS Energy Institute and Distinguished Professor of Fuel Science, as the recipient of the 2011 Excellence in Catalysis Award. He was recognized during the spring symposium in May 2011 for his accomplishments is the field of catalysis on sulfur removal from hydrocarbon mixtures and hydrocarbon conversion for energy oriented processes.

Each year the Catalysis Club of Philadelphia, a founding section of the North American Catalysis Society, recognizes an outstanding member of the catalysis community who has made significant contributions to the advancement of catalysis. As the 2011 recipient, Dr. Song presented an award lecture during the September 2011 meeting titled Oxygen Enhanced Water Gas Shift Over Bimetallic Catalysts for More Efficient Hydrogen Production. 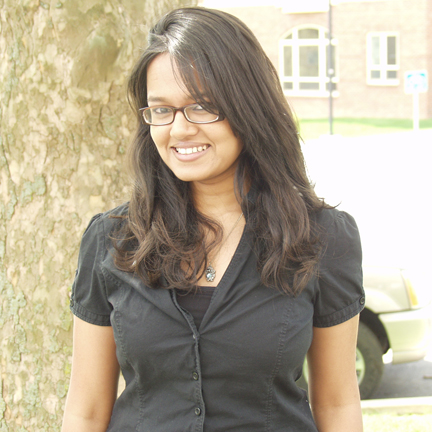 Riteja Dutta, a master’s student in petroleum and natural gas engineering, won the 2012 Society of Petroleum Engineers (SPE) Rocky Mountain/Mid-Continent/Eastern Region student paper competition with her presentation, Laboratory Study of Fracturing Fluid Migration due to Spontaneous Imbibition in Fracture Tight Formations. The competition was held during the April 16 conference at Missouri University of Science and Technology.

SPE coordinates ten regional student paper contests at the undergraduate, master’s and doctorate level. The winner in each region is invited to participate in the International Student Paper Contest, held during the Annual Technical Conference and Exhibition (ATCE). Dutta will represent Penn State during the 2012 ATCE, October 8-10, in San Antonio, TX. 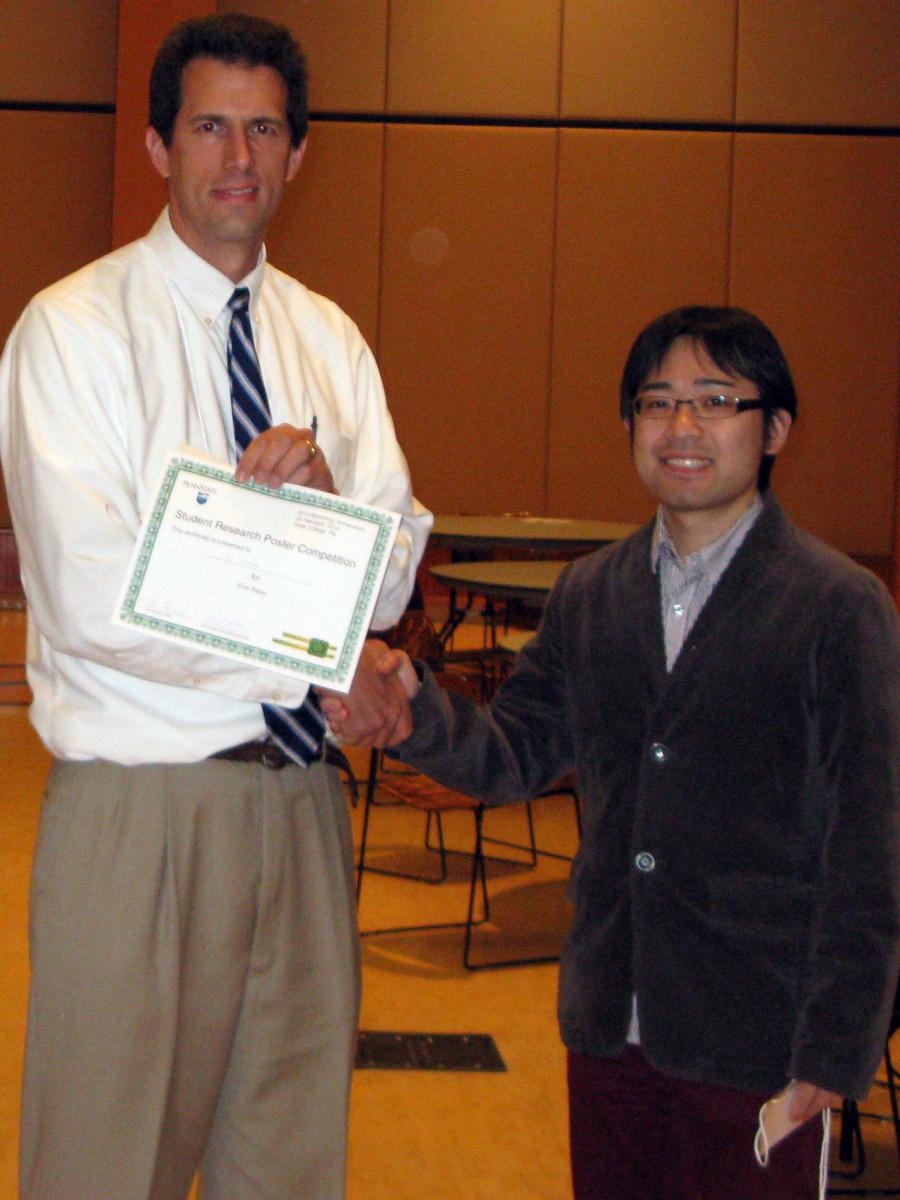 Yu Noda, a graduate student in the Department of Energy and Mineral Engineering was awarded first prize for his poster, Conversion of Lignocellulosic Biomass by Sequential Combination of Organic Acid and Base, at the 2012 Bioenergy Symposium.

The Symposium was held on February 29 and this year’s focus was Pathways to the Future – Short Rotation and Perennial Crops. The student poster competition was open to all graduate and undergraduate students who are currently working on research in the field of bioenergy and symposium attendees were asked to help judge the quality of the submitted posters.

Noda’s poster was based on his doctoral work at the EMS Energy Institute and the Department of Energy and Mineral Engineering. His advisor is Dr. Chunshan Song and co-authors on the poster included Ungkana Wongsiriwan, Pattarapan Prassarakich, Yaw Yeboah, and Chunshan Song. 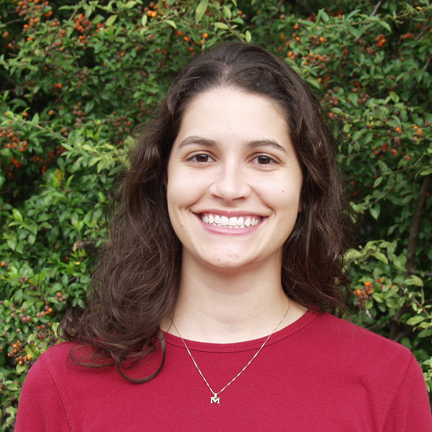 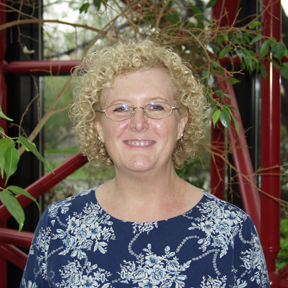 Meredith Hill Bembenic, a graduate student in the John and Willie Leone Family Department of Energy and Mineral Engineering, and Dr. Caroline Burgess Clifford, senior research associate, EMS Energy Institute, received the R. A. Glenn Award for best paper from the American Chemical Society (ACS) Fuel Chemistry Division. The award, which was for a technical paper given at the 2010 ACS National Meeting, Examination of Hydrothermal Lignin Conversion using Carbon Monoxide, was presented during the ACS Fall 2011 National Meeting.

The ACS Division of Fuel Chemistry, in cooperation with Bituminous Coal Research, Inc., established the R. A. Glenn award to recognize outstanding papers presented at division symposia. The award is based on the oral presentation, technical subject matter, and the quality of the preprint. 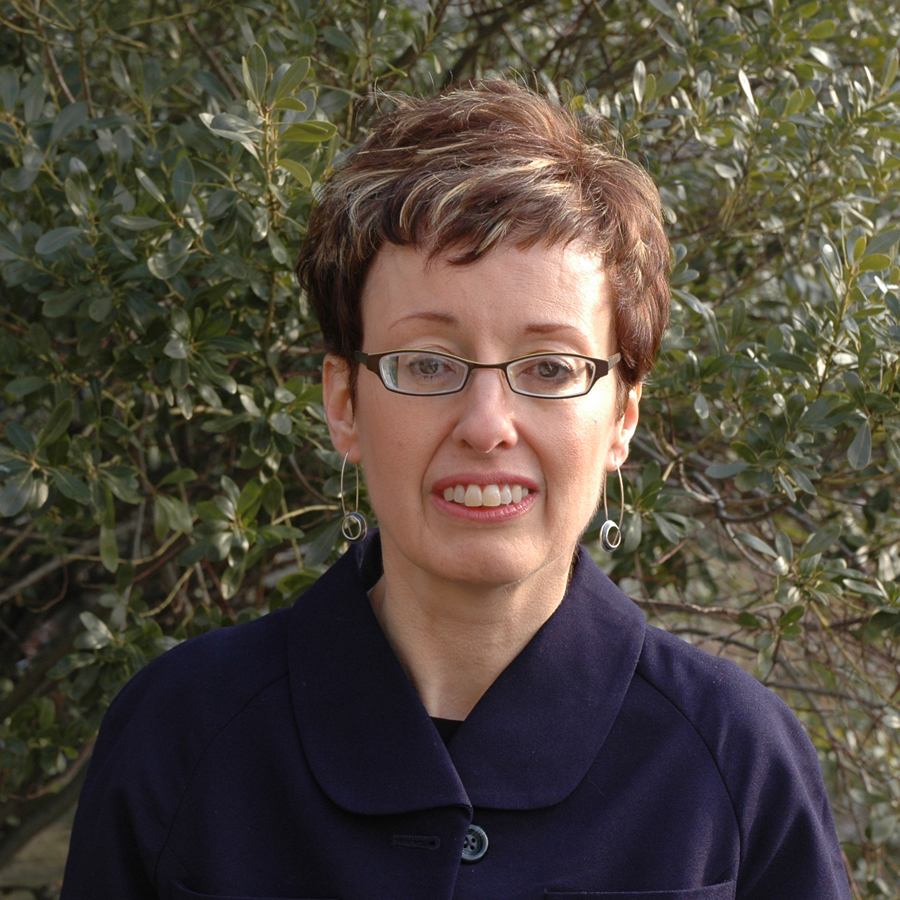 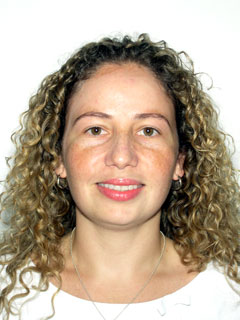 Zuleima Karpyn received a promotion to associate professor and tenure. Karpyn, petroleum and natural gas engineering, has research in the areas of reservoir characterization and multiphase transport phenomena in porous media, including applications in reservoir engineering, underground hydrology, and environmental remediation.

Dr. Sharon Falcone Miller received a promotion to senior research associate at the EMS Energy Institute. Dr. Miller has over twenty-five years of research experience in the field of fossil fuel and biomass utilization in combustion and gasification systems, analytical techniques for the characterization of the inorganic component of coal and biomass, ash and slag behavior, and their physical properties as well as trace element emissions.

Falcone Miller is also the Director of the Office of Student Development at the EMS Energy Institute, which promotes the participation of undergraduate students from a variety of disciplines in research experiences at the Institute.