Recent Graduates Reflect on the Institute, Well Prepared for Future 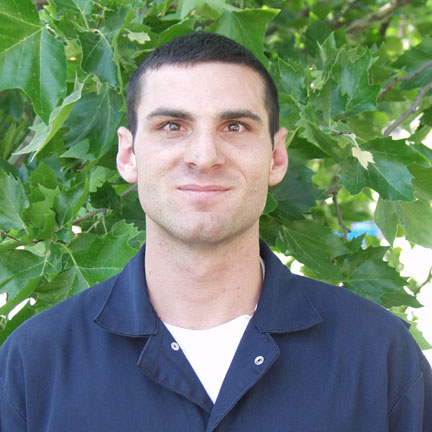 “The experience I gained as an undergraduate researcher for the EMS Energy Institute has been invaluable to my skill set as an engineer,” LaBarbera said.

He quickly proved his ability in the lab and was an integral part of several projects to analyze potential fuels sources such as coal-water slurries (a waste product of coal powder, water, and chemical stabilizes) and corn stover (the remnants of a corn plant after the ear is removed).

Possibly the project in which he was most involved was for a combined electricity and steam generation facility in western Pennsylvania. LaBarbera, alongside Wasco and Bradley Maben, research technologist, EMS Energy Institute, designed, installed, and began the initial operation of a coal-water slurry mercury capture system to reduce the power plant’s environmental impact. The team collaborated with the plant’s engineers throughout the entire process and, after completing the design, traveled to the facility for a week of on-site installation directly working on the burners. The team began the operation of the mercury capture system to ensure everything ran smoothly before transferring control back to the power plant engineers.

“Mark is a very hands-on engineer, eager to learn, and willing to take on new challenges. He was an excellent undergraduate student researcher, which carried over to his graduate study. I was most impressed with his independence in helping me formulate a coal-water slurry (CWS) for a major Canadian coal mining company,” Miller said.

LaBarbera came to Penn State from New Jersey. He initially attended Penn State Hazelton, transferring to University Park after his third semester. He studied chemical engineering with a fuel and energy engineering option, and interned at NOVA Chemicals outside of Pittsburgh, manufacturing polymers, his junior year. After completing his undergraduate degree, he decided to stay at Penn State and immediately began a graduate program. He was offered position with Dr. Serguei Lvov, professor of energy and mineral engineering, to continue a solid oxide fuel cell (SOFC) research project.

“Research at the EMS Energy Institute is exciting and engaging for any future engineer or scientist eager for hands-on experience with real-world fuel processing and analysis techniques.”

For his graduate work, LaBarbera designed, assembled, operated, and analyzed solid oxide fuel cells operating on a variety of alternative fuels. Initially, he used traditional analysis techniques, but with U.S. Department of Energy support, he was able to carry out state of the art impedance spectroscopy analysis of the fuel cells. 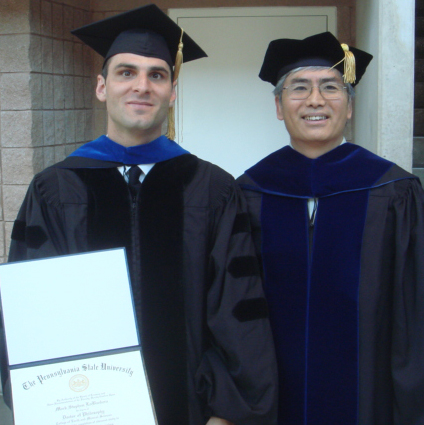 The results of the SOFC project opened the door for collaboration with another research group at the EMS Energy Institute, the fuel reformation research team, led by Dr. Chunshan Song, Distinguished Professor of fuel science. Working together, the groups integrated a fuel reformer directly with a SOFC to analyze the performance of diesel reformate and anaerobic digester gas as fuels for SOFCs.

Finally, this work allowed researchers to study a novel anode designed to directly use solid hydrocarbon fuels (coal and biomass) in SOFCs. This technology, while in its early stages, could significantly increase the efficiency and substantially reduce the carbon footprint of electrical power generation.

LaBarbera noted that his graduate and undergraduate research experiences were highly relevant to their respective industries, something that will prove valuable as he begins his job hunt for a position as a SOFC scientist/engineer in industry research and development.

“Research at the EMS Energy Institute is exciting and engaging for any future engineer or scientist eager for hands-on experience with real-world fuel processing and analysis techniques,” LaBarbera said. He added that at the Institute he was personally responsible for and involved in every aspect of the project from initial proposal writing and planning to experimental analysis and reporting results directly to industrial partners.

Gregory Lilik (’12 EME) came to Penn State as a graduate student in energy and geo-environmental engineering and began working with Dr. André Boehman, professor of fuel science, as a graduate research assistant in the diesel combustion and emissions lab at the EMS Energy Institute. After receiving his bachelor’s degree in mechanical engineering from Widener University in Chester, Pennsylvania in 2005, he knew he wanted to focus his education and career on energy-related problems.
“The Energy Institute’s multi-disciplinary approach to research and solving real world engineering problems made Penn State stand out among the other universities I interviewed,” Lilik said.

Lilik’s master’s work focused on hydrogen-assisted diesel combustion and resulted in several publications, including journal articles in Energy and Fuels, and the International Journal of Hydrogen Energy as well as a co-authored book chapter in Synthesis Gas Combustion: Fundamentals and Applications. In addition, his research experience was central to the Penn State hybrid electric vehicle team’s fifth place win in the 2007 Challenge X competition. His team implemented hydrogen assistance to a diesel hybrid Chevy Equinox as part of the U.S. Department of Energy- and corporate-sponsored competition in which student teams from seventeen universities compete to re-engineer a Chevrolet Equinox into a vehicle that is more fuel efficient and cleaner running while maintaining the vehicle’s original utility.
After completing his master’s degree, Lilik had the opportunity to work at the Oak Ridge National Laboratory in Tennessee as a post-master’s researcher. While there, he maintained and conducted experiments on an engine test stand, but equally as important, he had the opportunity to work alongside and network with experts in fuel science while conducting his research. 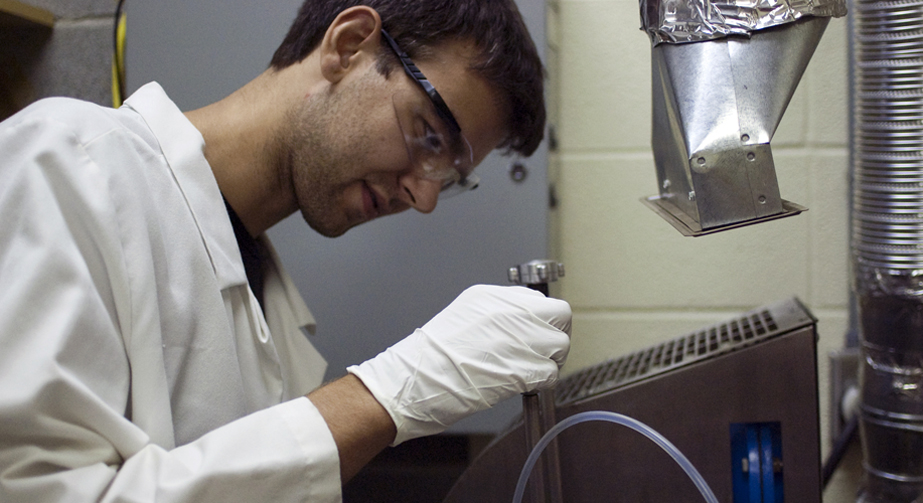 Lilik returned to Penn State to complete a doctorate degree in energy and mineral engineering with a fuel science option. After several years working as a research assistant in the combustion lab, he became an expert on the experimental setup of instrumentation and data acquisition systems so he began to take an active role in assisting other students at the Institute. Lilik explained that he was motivated to cooperate with his peers by offering his technical skills and any knowledge he gained from previous experiences. However, he added that he also continues to learn from the experiences of his peers and the faculty with whom he works.

Lilik’s doctoral research focused on fuel chemistry effects on advanced diesel combustion, specifically examining advanced combustion diesel operation using coal-based Fisher-Tropsch fuel. His research led to a method for reducing all major emissions while increasing combustion efficiency in a diesel engine, a development that produced a patent disclosure between Penn State and Conoco Phillips with Lilik as the lead inventor.

“The Energy Institute’s multi-disciplinary approach to research and solving real world engineering problems made Penn State stand out among the other universities I interviewed.”

In 2011 Lilik and his advisor, Boehman, attended the Volvo Group Tech Show in Gothenburg, Sweden. The show gave Lilik the opportunity to network with industry professionals and help expand the relationship between Penn State and Volvo by discussing ongoing research with Volvo scientists. 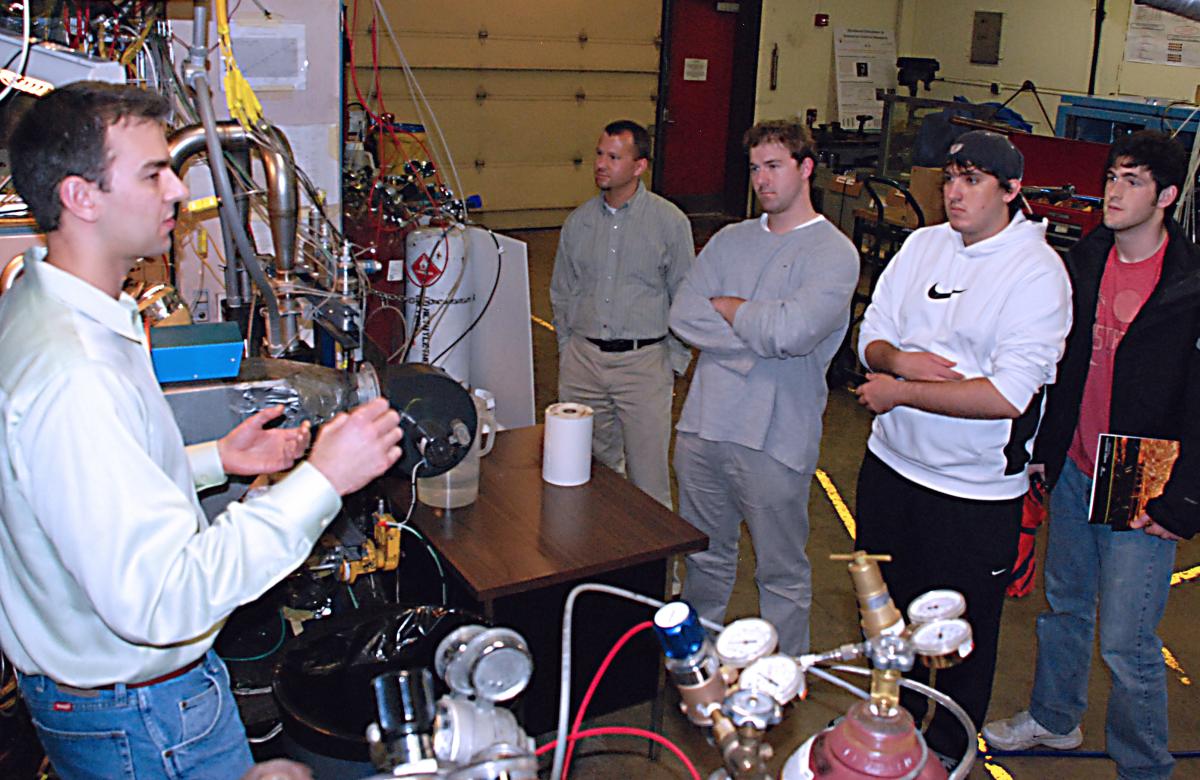 “Greg Lilik has been a tremendous asset to the EMS Energy Institute through his scholarship, his work ethic, and his willingness to help others in their research. His thesis is a significant and valuable contribution to the literature and generated an invention disclosure. We will be sorry to see Greg leave the EMS Energy Institute, but we are delighted that he is heading to a prestigious post-doctoral research position in the combustion research facility at Sandia National Laboratory, Livermore,” Boehman said.

In the summer of 2011, Lilik was accepted, along with four other students, to the Sandia National Laboratory’s summer institute in Livermore, California. The institute focused on combustion and while there Lilik worked with Sandia researcher Dr. Mark Musculus to examine measurement uncertainty with imaging detectors. Later that year he was invited to return to Sandia, and in early 2012 he presented a seminar based on his research to some of the world’s experts in combustion. Afterward, he was offered a post-doctoral appointment under Dr. Charles J. Mueller. Lilik will begin his appointment at Sandia National Laboratory in summer 2012.

“Research at the Energy Institute was a very fulfilling experience, mainly due to the opportunities that were available. The faculty and staff facilitate research and provide graduate students with many opportunities to publish and achieve. In particular, my advisor Dr. André Boehman has been an outstanding mentor, who saw my potential and guided me to reach it,” Lilik said.