Research Briefs from Around the Institute

From exploring alternative energy sources to developing new technologies for the production, generation, and utilization of energy, the EMS Energy Institute is involved in almost every aspect of energy research. This section highlights the diversity of some of our ongoing projects.

Dr. Li Li, assistant professor, energy and mineral engineering, focuses her research on understanding the connections between multiple processes in natural, heterogeneous subsurfaces, including soils, sediments, aquifers, and reservoirs. In particular, she examines the simultaneous occurrence of (bio)geochemical reactions, transport, and flow processes with the goal of obtaining a mechanistic understanding of these processes as well as developing models to interpret, quantify, and predict the dynamics of multiphase flow and reactive transport processes in complex subsurface systems.

Li’s research is at the interface of energy and environment and she currently has two projects that focus on environmental implications of energy resources important in today’s energy climate. One project, on carbon sequestration, looks at how to prevent storage reservoirs from leaking. For the second project Li is studying environmentally friendly and cost-effective technologies for recovering heavy oil.

Geological carbon sequestration involves the long-term storage of carbon dioxide removed from the atmosphere to mitigate the effects of greenhouse gasses. The idea is to inject supercritical carbon dioxide captured from industrial operations into deep subsurface reservoirs to reduce carbon concentration in the atmosphere. One of the major concerns with carbon sequestration is the potential for the carbon dioxide to leak from the storage reservoir and seep into nearby groundwater. One cause of leaks can be chemical reactions that degrade wellbore casings and cement intended to trap the carbon dioxide.  If the carbon dioxide reaches subsurface or surface water, it can have large environmental impacts on water quality; this is a specific concern for drinking water resources. Li’s research, partially funded by the Department of Energy’s National Energy Technology Laboratory (NETL), looks at the possibility and impacts of carbon dioxide leakage. Her group is studying property evolution of wellbore cement in abandoned wells during its interaction with carbon dioxide and brine. These interactions could potentially increase the possibility of carbon dioxide leakage. In addition, they are investigating potential water quality impacts if carbon dioxide does leak.

A second project funded by BP focuses on enhanced oil recovery, specifically using environmental friendly and cost-effective technologies to recover heavy oil. In particular, Li is studying bacteria-mediated biogeochemical reactions to produces chemicals such as biosurfactants, biopolymers, acids, and gases. These chemicals either change the properties of oil and gas or the properties of the reservoir to improve the heavy oil recovery process. For example, Li’s group is currently working on using bacteria to produce biopolymers. These biopolymers can be used to selectively plug certain regions of an oil reservoir to change the relative magnitude of permeability. The goal is to increase sweeping efficiency from the original low permeability zones. In this work, Li’s group is collaborating with research scientists from Lawrence Berkeley National Laboratory to integrate experimental observations with modeling predictive capabilities.

The EMS Energy Institute is working on a project in conjunction with Research Triangle Institute (RTI) as part of a Department of Energy (DOE) program focused on lowering the cost of carbon capture technologies for coal-fired power plants.

Coal-fired power plants generate about half of the nation’s electricity. Without new technologies aimed at capturing harmful gases from these plants, carbon dioxide levels in the atmosphere will continue to increase, which could have serious consequences for the environment. Carbon dioxide capture technologies, similar to a filter added to a new or existing plant, effectively remove potential greenhouse gasses from the atmosphere by isolating carbon dioxide from other gasses before the gasses leave the plant.

By developing new materials, which can take the form of solvents, membranes, or sorbents, DOE’s goal is to find a cost-effective, energy-efficient solution so plants can continue to use coal, an important domestic resource, while reducing environmental impacts.

The focus on the project with RTI is to develop an advanced, solid sorbent-based carbon dioxide capture system. The key to this process is a novel technology known as a Molecular Basket Sorbent (MBS), which researchers at the EMS Energy Institute have spent several years developing and improving. The idea of MBS development is to load carbon dioxide-attracting polymers onto high surface area nanoporous materials to increase the number of sorption sites on the sorbent and enhance the sorption/desorption rate.

EMS Energy Institute researchers are working to help develop a commercially viable MBS while reducing associated costs. The project, Bench-Scale Development of an Advanced Solid Sorbent-based CO2 Capture Process for Coal-fired Power Plants, will specifically look to increase the carbon dioxide loading, reduce the cost compared to current MBS forms, promote the thermal, chemical, and cycling stability of the MBS, and make the sorbent fluidizable for use in a fluidized-bed system. Dr. Chunshan Song, Distinguished Professor of Fuel Science and director of the EMS Energy Institute, is the principal investigator on the project.

The carbon dioxide capture process developed through this project will have significant potential to meet DOE’s target performance by removing at least 90 percent of carbon dioxide emissions from a plant without increasing the cost electricity produced by more than 35 percent.

Other partners on the project include Masdar, Süd-Chemie, Inc., and Foster Wheeler USA. 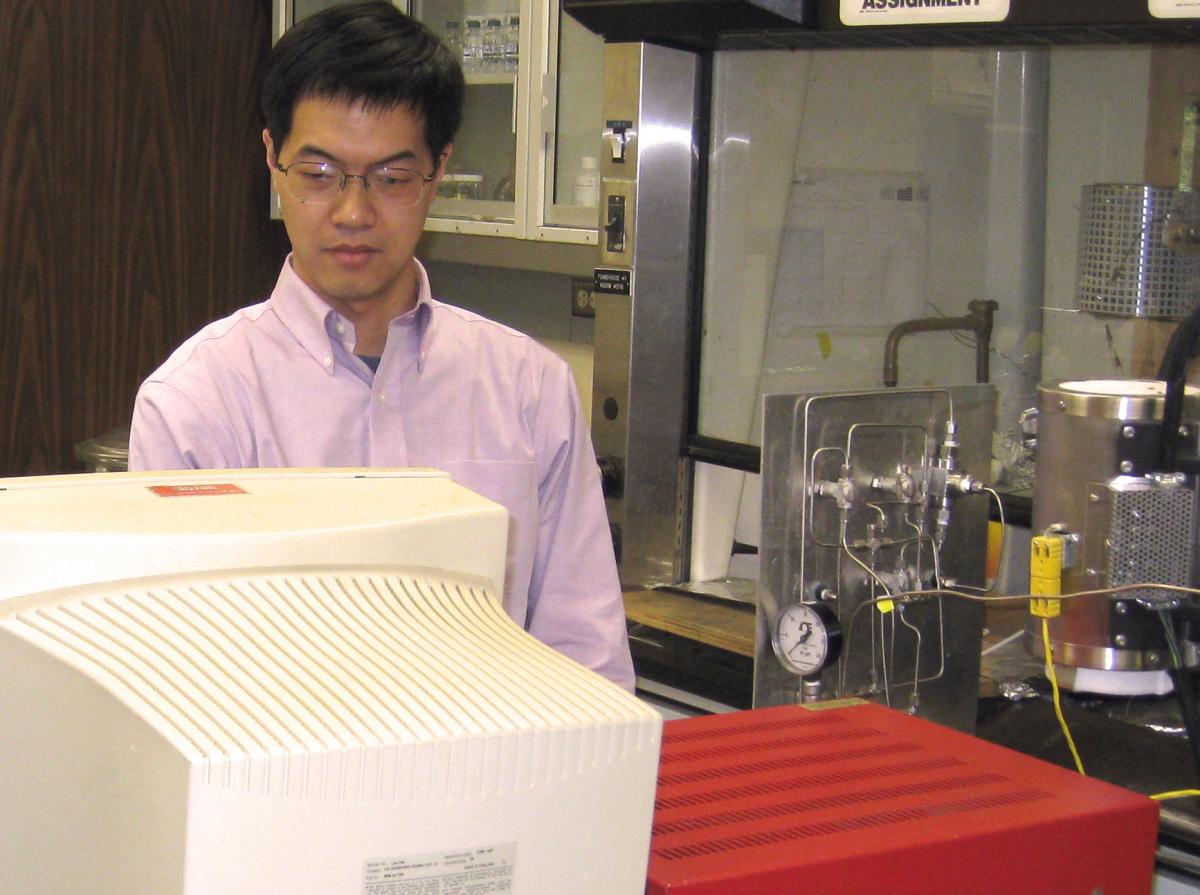 Carbon dioxide emissions are causing concern, fossil fuel reservoirs are decreasing, oil prices are increasing, and alternative energy continues to gain momentum. So it’s no surprise the use of biomass for liquid fuel production has received a great deal of attention recently in fundamental and applied research. Biomass is a renewable energy source and can include plant material, vegetation, or agricultural waste. Its benefits include the fact that as an energy source biomass is abundant, readily available, and almost carbon neutral. Dr. Xiaoxing Wang, research associate, EMS Energy Institute, is the principle investigator on two projects, one supported by the Department of Energy and the other supported by the Department of Defense, that explore a novel process for converting renewable biomass including woody and herbaceous materials to liquid hydrocarbon fuels such as gasoline and jet fuels. Dr. Wang’s work focuses on converting biomass-derived light olefins to liquid fuels, which is one of the key steps in the proposed process for liquid fuel production from biomass.

The main objective in the conversion of light olefins to liquid fuels is to explore the feasibility of using the proposed new process and to develop a new type of catalyst for the production of liquid hydrocarbon fuels from light olefins derived from biomass at relatively mild reaction conditions. Since light olefins derived from biomass may contain some amount of carbon dioxide, carbon monoxide, and other impurities, a highly active and carbon-resistant catalyst will be necessary. In this research, novel metal loaded hierarchical meso-microporous zeolite catalysts are proposed and under development. Unlike the conventional zeolite-based catalysts, which are ineffective for processing large molecules that cannot diffuse inside the micropores, the designed meso-zeolite catalysts consist of a network of connected mesopores (2-50 nm, IUPAC) and micropores (< 2 nm, IUPAC) for olefin reaction and large molecules diffusion, thus the activity and selectivity can be improved and the coke formation will be mitigated. As part of the research effort, the research team is also seeking to make the conversion process more energy efficient, economical, and environmentally friendly.